*Winner: Sorento Out of a possible 180 points, the Sorento scored 138 points and the Santa Fe earned 125 points.

When you scale back some of the Sorento's features, you're left with a car that's similarly priced as the Santa Fe with an edge on interior quality, ride quality and overall refinement. It does all of that with slightly less space than the Santa Fe, most notably in cargo area, but with its new dimensions, there's not that big of a difference between the two and the Sorento is clearly a step above in many areas. 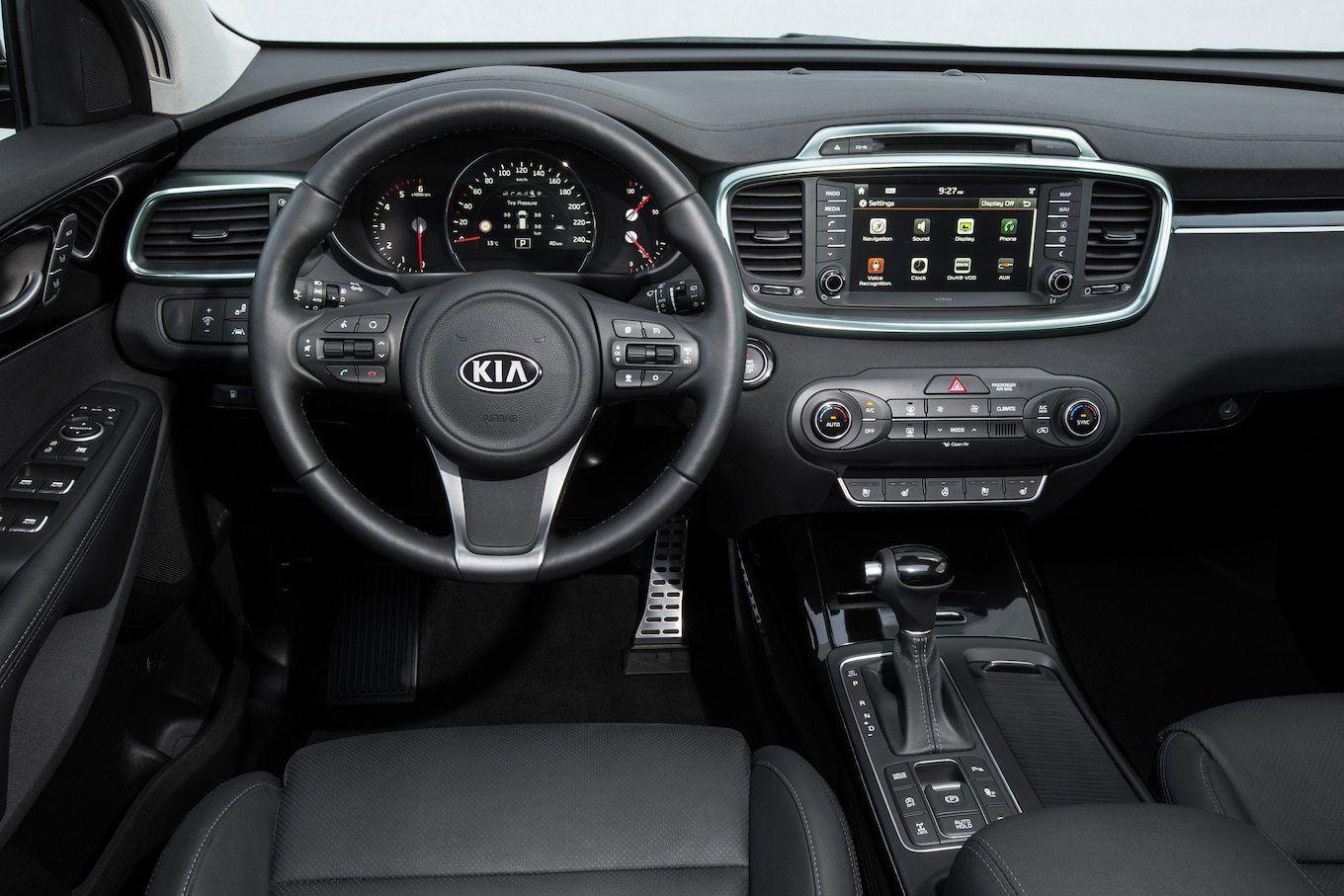 *Winner: Sorento Kia took a big step forward with the 2016 Sorento's interior quality. Our top-line test car showcased the best the Sorento offers with supple Nappa leather seats that are truly a step above the Santa Fe's leather seats. Hyundai's design leans toward elegance with wood trim and light coloring, while the Sorento is geared toward sportier, darker colors. The Sorento's quality will cost you, though; the Nappa seats are standard on only the top SXL trim level.

*Winner: Santa Fe The Sorento is still a little short on space in some areas compared with the Santa Fe. Both offer great levels of comfort in the first row, with a tad more front legroom in the Sorento. While in the second rows, the Santa Fe has more legroom and a wide-open walkway between the captain's chairs. The third row is where the difference is made. The Santa Fe gets the nod here with a more comfortable seating position and easier access from one-touch sliding seats on both the driver and front passenger sides. The Sorento only has this feature on one side.

*Winner: Sorento Both SUVs use an 8-inch touch-screen, but the Sorento pulls ahead with intuitive physical controls featuring separate dials for both tuning and volume as well as an easier-to-use layout that's much more familiar and traditional than the Santa Fe's random collage of buttons. Our Sorento tester had more USB inputs including one in the backseat, as well as forward collision warning, adaptive cruise control and a 360-degree parking monitor - none of which are available on the 2015 Santa Fe.

*Winner: Sorento Being corporate cousins, the Sorento and Santa Fe share the same 3.3-liter V-6 making a stout 290 horsepower and 252 pounds-feet of torque, which each pairs to a six-speed automatic transmission. You'd expect them to accelerate similarly since they weigh within 40 pounds of each other, but the Sorento gets a slight edge with crisper acceleration in the available Sport mode, which the Santa Fe doesn't have. The Sorento also has a slightly more aggressive axle ratio, giving extra pep off the line.

*Winner: Sorento The Sorento's tight chassis tuning shows in ride quality; it's controlled and sophisticated for this class. Its suspension and tires soak up road imperfections well and keep the road separate from the cabin. The Santa Fe still rides well and is perhaps a little easier on longer highway drives. 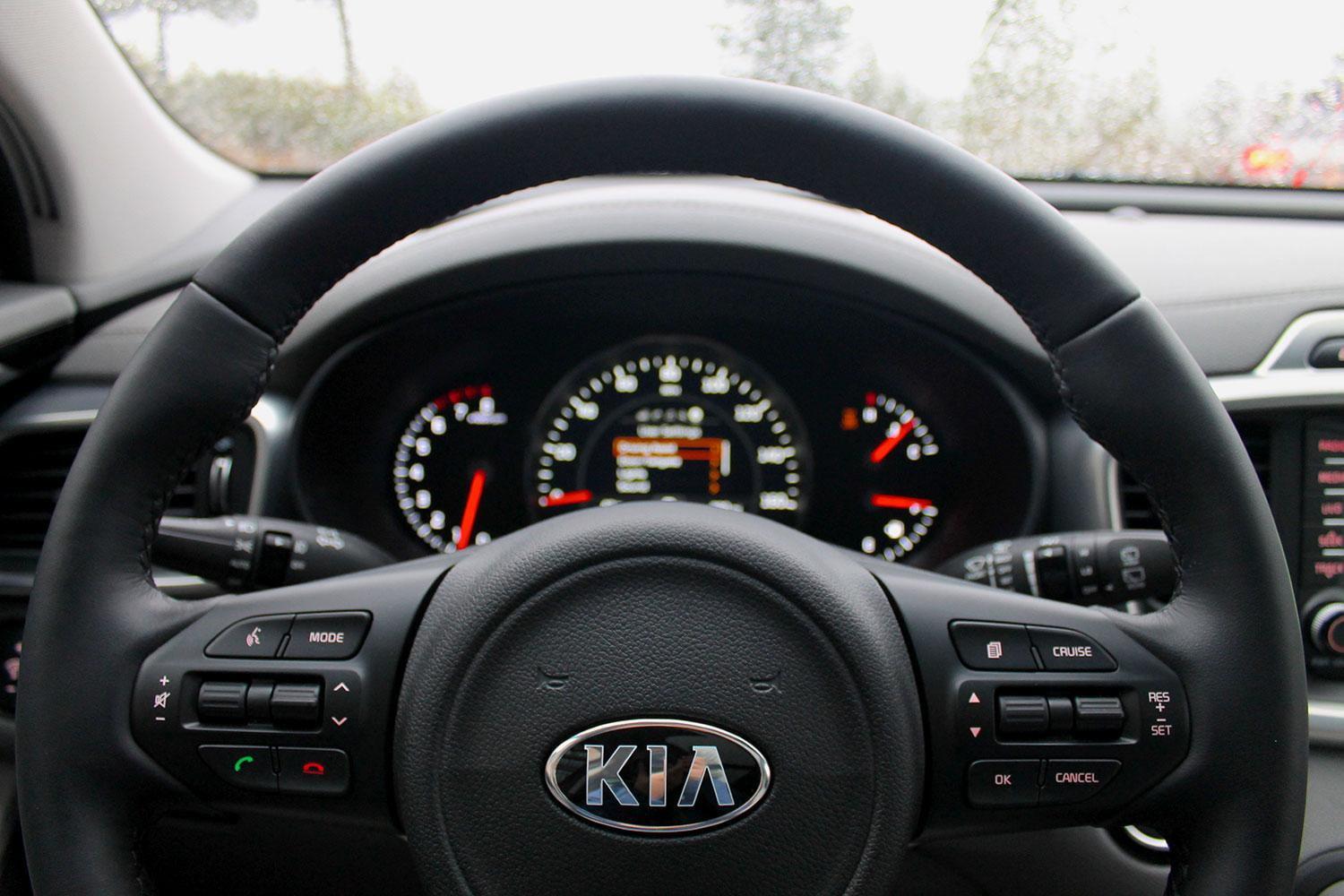 *Winner: Sorento The Sorento is a tighter package all around when it comes to ride and handling. The Santa Fe feels heavy and cumbersome while cornering whereas the Sorento is more precise and confident in nearly all driving situations. Kia stiffened the Sorento's chassis for 2016, though its Michelin tires may have a lot to do with its on-road performance. The Santa Fe's Kuhmo tires screamed in even mild corners; take note, perpetually late soccer parents.

*Winner: Sorento Again, the Sorento's on-road performance is a step above the Santa Fe. The Santa Fe's road noise was prominent, and there seemed to be higher amounts of road noise from the tires. Our Santa Fe test car had around 9,000 miles on the odometer, but the Sorento had 11,000 and still felt tighter and quieter on the road.