Korean automakers have come a long way since their beginnings in the 1980s. A strong commitment to quality and value has transformed Korean made vehicles into worthy competitors for their Japanese, American, and European counterparts. Well-made, sharp looking and tech-laden cars, trucks, and SUVs now replace the troublesome Korean imports of years gone by. However, even though Korean brands now land at or near the top of every major survey when it comes to initial quality, consumer perception in the automotive world often lags reality by as much as a decade or more. Because of this fact, low sticker prices on Korean vehicles provide savvy buyers with the rare opportunity to drive away in an exceptional vehicle, at a great price. While smart shoppers have scored some amazing deals of late, some consumers still think of Korean made vehicles as poorly made, less safe than most of their competition, and lacking in creature comforts. With that said, here are the "Top Four" misconceptions about Korean vehicles, and why they no longer ring true.

Both Hyundai and KIA entered the world marketplace with their eye on providing value, over long-term quality and reliability. Through the years, however, both brands, especially KIA, have added more and more style, technology, comfort, and safety features to every vehicle in their lineup. About seven or eight years ago, KIA took it up another notch and began making cars that rank as high or higher in initial quality and reliability as any of their competition.

Based on a 2015 J.D. Power Initial Quality Study which measures new-vehicle quality after ninety days of ownership, KIA ranked second among thirty-three nameplates surveyed. But, KIA didn't stop there. In 2017, they won the top spot in J.D. Power's annual report on vehicle quality for the second year in a row. In contrast, loyal owners of Japanese and German vehicles saw their brands -- most notably, Toyota and Lexus -- fall behind.

Another unfortunate misconception people have about Korean cars is that they are unsafe. But, nothing could be further from the truth. As a matter of fact, Korean manufacturers make some of the safest vehicles on the road today. Features like Front Crash Prevention and LED Headlights have landed late model KIA vehicles, for example, on the IIHS "Top Safety Pick +" list for the past several years. The KIA Optima has also earned a five-star safety rating from U.S. News and World Report. Korean vehicles offer the same great safety features such as -  Advanced Smart Cruise Control, Forward Collision-Avoidance Assist, Lane Departure Warning, and Rear Cross Traffic Alert - as do all other vehicle manufacturers. In general, Korean carmakers consider safety a top priority in the production of their vehicles. Plus, Canadian law requires that "All vehicles made for sale in Canada and all vehicles imported into Canada must meet the Canada Motor Vehicle Safety Standards."

That may or may not have been true at one time but, it's certainly not true today. In a Consumer Reports survey of over 640,000 subscribers, the KIA Sportage ranked third (behind only Lexus and Toyota) among all vehicles manufactured between the years 2000 and 2017. Hyundai placed tenth in the same survey. While tenth may not sound like much of an achievement, consider that five of the nine brands who came in ahead of Hyundai were luxury labels, and one was another Korean name, the previously mentioned KIA. These rankings might come as a surprise to consumers but, those in the car industry have known for years that Korean manufacturers make exceptionally reliable vehicles.  KIA, for instance, placed as high as ninth on the Consumer Reports Survey as far back as 2010.

Admittedly, Hyundai isn't the first name that comes to mind when the words "luxury vehicle" are uttered. But, the Korean carmakers Genesis line beat out Japanese, American, and German rivals to win the title of "2018's best car brand in the U.S." according to Consumer Reports. KIA, also owned by the same parent company, came in sixth with the K900. The K900 rivals the best German luxury sedans in every way except price. New car buyers can expect to pay anywhere from twenty to forty percent less for the K900 than for a comparably equipped competitor vehicle. For budget-minded comfort seekers, KIA also makes the Cadenza. Two of the three Cadenza trims come standard with features such as a Harman/Kardon QuantumLogic 7.1 channel surround sound system, an eight-inch touchscreen display with navigation and a backup camera, and push-button start. Of course, these are just a few of the amenities Cadenza owners enjoy but, the point is - Korean vehicles come with all of the same luxury features found on their higher-priced competition, just at considerably lower prices.

With great success, Korean automakers have made every effort through the years to build better, safer, and more comfortable vehicles, and change buyer perception of their brands. Also with great success, Eastside KIA has worked hard through the years to provide friendly and professional service, excellent prices, a huge selection of new and used KIAs, and to become the number one KIA dealership in Calgary and all of Canada as well. 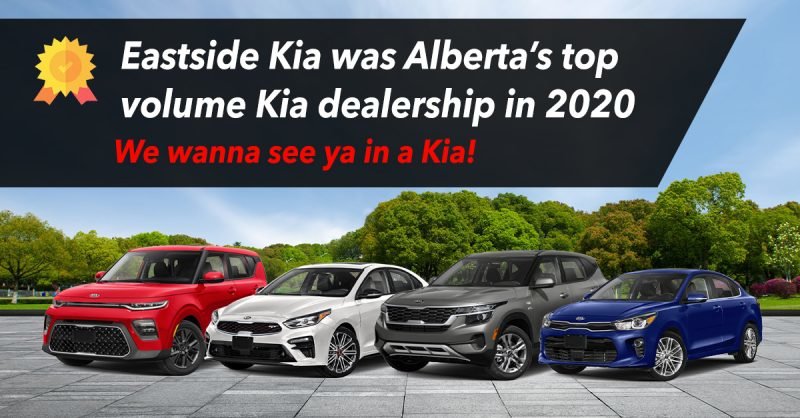